What Westerners call Chinese New Year, the Chinese call the Spring Festival.  All Chinese Festivals are special events, but Spring Festival is the biggest, most elaborate and lasts the longest – 15 whole days and nights!  Each day has a special significance (See below).  Spring Festival begins on the first day of the first lunar month under the new moon; fifteen days later Spring Festival ends with the Lantern Festival which is celebrated under the light of the full moon.  This year that corresponds to January 23 and February 6 on the Gregorian calendar that Westerners use.
Before the Spring Festival begins cleaning, cooking, and shopping must be completed as the evening before the first day of the first lunar month is for spending time with your family, eating and telling stories.  Midnight marks the transition to the New Year with firecrackers and dumplings.  Spring Festival’s fifteen days all have special tasks.
First Day: No cleaning!  All your good fortune might be swept out the door!  Children are given money in decorated red envelopes.  And the gods are welcomed.
Second Day: Prayers are sent to your ancestors as well as the gods.  Dogs enjoy their birthdays this day.
Third and Fourth Days: Sons-in-law are expected to show their respect to their in-laws.
Fifth Day: The God of Wealth (Making Money Correctly) is welcomed into homes.  You should not be out visiting when he comes.
Sixth to Tenth Days: Visiting friends, relatives, and the temples takes place.
Seventh Day: Traditionally people eat noodles to bring long life.  It is also humankind’s birthday.  Farmers are honored on this day.
Ninth Day: Offerings are made to the Jade Emperor.
Tenth to Twelfth Days: Visiting is over and invitations to family and friends to join you for a meal are given.
Thirteenth Day: Take a break from overeating and eat simply on this day.
Fourteenth Day: All preparations for the Lantern Festival are made.
Fifteenth Day: The Lantern Festival is celebrated under the first full moon.  Lanterns are lit, parades wind through the streets, and sticky rice balls are consumed. 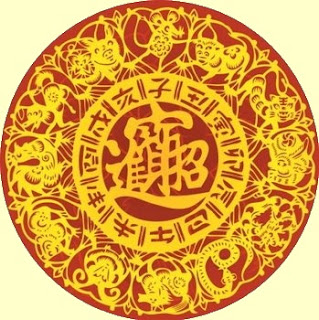 The Chinese Zodiac consists of twelve animals each representing a year every twelve years.  This is the year of the Dragon (long 龙).  People born during Dragon years are said to be energetic, imaginative, full of fun and lucky.  Dragons are the movers and shakers of the world.
Chinese Dragons are benevolent, unlike the Western Dragons which are cruel and demand sacrifice.   The Dragon was the symbol of the Emperor because the Dragon represents wealth, wisdom, power, and nobility.  In the old days only the Emperor could wear this symbol. 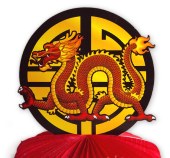 Story of Nián
The Chinese word for year is nián (年).  There is good reason for this.  Nián was the name of a ferocious monster with a voracious appetite that plagued the countryside every year eating livestock and people as well.  So each year the people of the villages would flee to the mountains for safety driving their livestock ahead of them.
One year an old man entered the village just as everyone was fleeing.  He stopped at the home of an old woman and asked, “Why are the people leaving your village?”
“Because,” she answered, “they are afraid.”
“Why are they afraid?” the Old Man queried.
“You don’t know?”  The Old Woman was incredulous.  She told the Old Man about Nián and its terrible appetite.
“Ah…”  The Old Man stroked his beard.  “Would you like to be rid of Nián forever?”
“Of course,” replied the Old Woman.  “But how can we do that?  It eats everything!”
“Leave it to me.  May I stay in your house tonight?”
“Yes, but I hope you will still be here when we return.”  And with that the Old Woman picked up her bundle and was off.
The Old Man covered the all the windows with red paper and cloth.  He made pyres of bamboo on the paths leading to the entrances.  He set firecrackers up so he could light one and all would go off.  And then he sat back and waited.
That night the Old Man heard a terrible roaring and gnashing sound.  He peeked out the window and saw Nián emerging from the dark.  Quickly he lit the fires and firecrackers.  Nián saw the red in the windows and the bright flames from the fires.   Nián heard the loud pop pop of the firecrackers.  Nián stood still, then turned and ran away into the night.
When the villagers returned to their homes, there was the Old Man waiting for them.  They crowded around him with questions flying.  He held up his hand; then told them about what had happened in their absence.
“Really?” the villagers asked.  “Nián is afraid of red, loud noises and bright light?”
“Yes,” answered the Old Man.
And the celebration began.  Now every year people all over China and elsewhere in the world celebrate the New Year with Red, Loud Noises and Bright Lights.  And Nián has not been seen since.
There are many versions of the story of Nián.  This version of the story was told to me by Mr. Li Kuo, a teacher from Heilongjiang Provence located in the Chinese rooster’s head.  Mr. Li is spending the current school year teaching Mandarin to HS students in Monte Vista, CO, and was a great help in finishing the pinyin glossary for my book, Old China through the Eyes of a Storyteller, to be published by Parkhust Brothers late Summer, 2012.

Here are some websites that give more details about the Chinese New Year.


http://education2.uvic.ca/Faculty/mroth/438/china/chinese_new_year.html
Brief explanation of the Chinese New Year and links to more details.
http://china.mrdonn.org/newyear.html
A fun social studies website for teachers and students.
http://www.rightathome.com/Family/Articles/Pages/WelcometheDragon.aspx
Hints for things to do to celebrate as well as ads for Johnson cleaning products.
http://www.china-family-adventure.com/chinese-zodiac.html
Simple explanation of the twelve Zodiac animals and a very brief story about why these twelve and not others.
Posted by Stories by Julie at 12:20 PM

Very interesting and informative, Julie! I'd like to tell the story of Nian tomorrow at my Circle, since the leader has suggested a 'New' theme! :)

Fiona, The story of Nian is old as Chinese New Year celebrations. If you tell this version, please give Mr. Li Kuo credit for it. Enjoy!