Fear of the Unknown


"So first of all, let me assert my firm belief that the only thing we have to fear is fear itself --  nameless, unreasoning, unjustified terror which paralyzes needed effortsd to convert retreat into advance."  --Franklin D. Roosevelt

The month of March brought fear back to me in vivid memory as we waited to see what the prognosis would be on my husband’s open heart surgery.


I’ve had heart problems most of my life, since I was a youngster stricken with rheumatic fever.  Although that was not the diagnosis at the time, the doctor did come every day for ten days with a huge shot of penicillin.  It got so I didn’t want to see him anymore; I still don’t like needles.  I wasn’t really physical as a kid, but back in those days it was okay for girls not to be athletic; so I contented myself with quieter activities like reading.
Age 23, I had my first genuine physical since I was 10.  Diagnosis: Heart murmur in the mitral valve.  Then fluid started collecting in my lungs at night when I was trying to sleep – scary not being able to breath.  The doctor thought it might be asthma.  I bought an over the counter inhaler which didn’t help at all.  There were nights when I slept in the recliner because lying down was impossible.  Finally, with a little detective work, we figured out the trigger was salt.   That led to the diagnosis of Mitral Stenosis.  The mitral valve had been damaged by the rheumatic fever 20 years before and had degenerated more through the ensuing years.
http://www.drugs.com/cg/mitral-stenosis.html 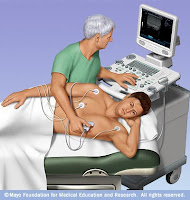 Over the next four years, my energy waned along with my weight.  I had been slender, but was now downright skinny weighing only 106 pounds.  I was told we had to wait.  It wasn’t “bad enough to operate.”  So how “bad” did it need to be?  I thought I was dying.  At 26, an echo cardiogram (the computer took up most of the room and the monitor was small with only green on black imaging; now the computer and monitor which shows the heart in vivid colors fit on a cart) and a cardiac catheterization showed that my mitral valve was almost completely useless as the opening was the size of a pencil instead of a large sausage.


Then when I was almost 28, it was time.  I was scared.  What would happen?  Would I be scarred for life?  Would I die?  My wonderful surgeon explained the whole operation to me – a closed heart commissurotomy which is rarely performed anymore.  He would make an incision under my left breast, stretch my ribs apart, and clean the valve with a small scalpel fitted over his finger.  That was still scary.  We toured the hospital.  That was a little bit reassuring.  My pastor visited with me a number of times to help reassure me.  On November 12, 1975, I presented myself at the admissions window of St. Luke’s Rush Presbyterian Hospital in Chicago, Illinois.  I was as ready as I would ever be.
I woke up with a tube in my throat.  I could not talk.  The nurses in ICU told me to bang on my bed if I needed something.  My ribs ached something fierce!  Pain meds allowed me to doze in that semi-awake state through the weekend.  I have a few vivid memories of isolated incidents during that time.  Mostly it’s a blur.  The next week was better.  Tubes had been removed; I could talk and walk around.  My ribs still hurt, but not as bad unless someone made me laugh.


As I recovered, I gained strength.  By that summer, I was playing tennis, running around the track at the local high school, and enjoying as sense of freedom.  Carrying the air-conditioner up from the basement was so easy – not the painful trip to carry it down.  I wondered if it would work since someone had obviously taken the heavy motor out of it.
The operation was said to last five to seven years; I knew I did not want to lose two years of my life again.  But after the seven years was up, I was still going strong and running after two kids!  Luckily my operation lasted 25 years.  In 2000, I had a balloon valvotomy performed.  No long recovery, I only missed a week of work instead of eight weeks.  A medical advancement well worth waiting for.


But all that worry, anxiety, and fear came flooding back early in March when my husband told me of his fears.  I believe the fear of the unknown is the hardest fear to overcome.  It is not until you are on the other side that it dissipates.
Posted by Stories by Julie at 9:17 PM

I’m glad I found this page it reminds me that every day is a gift and the very air we breathe with every breath we take could be our last. Life is precious and most of us go day in and day out without thinking about it. Your story hit home for me with my own personal experience and how I’ve gone on from my moment of fear to taking everything for granted and not give the life I have a second thought. It’s not that I’m callous, cavalier or not caring about life. It’s the fact that I’m just as human as the next person and fall victim to expecting the best, and everything to be all right. Your story is a nice reminder that we should not take anything for granted and live our lives with meaning and appreciate every day we are granted on this Earth. Thanks again for the post and your love for your husband and his love for you will get you both to the other side.
Art

Yes, we must not take our lives for granted. It is easy to find yourself in that rut over and over again. I'm glad my story was a good reminder for you. I need reminding of our precious gift as well.
Julie