Have you Ever Wondered Why There Is No Year of the Cat?

In Chinese Folklore, the story of how the Chinese Zodiac came into being tells about rivalry, competition and cooperation amongst the animals vying for an honored place in the zodiac.  If you are an aficionado of cats, you may ask yourself’ “Why no cats?  Isn’t the cat a lucky animal in Asian cultures?”

It is true that cats are considered lucky, especially in Japan where the maneki-neko or beckoning cat originated.   You may have seen a maneki-neko in Asian business establishments because it represents a wealth and prosperity feng shui cure.  If you know nothing about feng shui, it literally means wind and water, which we think of as harmony.  Practitioners of feng shui take the bagua, “a grid that reveals how the different areas of any building [or space] you occupy are connected to specific aspects of your life,” and place that grid over homes and businesses to let the owners know how to arrange their belongings to the best advantage.  So the maneki-neko in a business is placed near the entrance to welcome good customers; in a home it should be placed in the southeast (to the right of the entrance) part of the bagua, the wealth and money area.

But to get back to the Chinese Zodiac story which begins with the Jade Emperor who ruled the Heavens.  On his birthday he arranged for a swimming race to be held across a fast running river.  The first twelve animals to cross the finish line would have a year of the zodiac named for them.


Rat and Cat, good friends back then, were afraid they might not stand a chance as they were not good swimmers.  “Let’s ask Ox (water buffalo) for a ride!  He’s a wonderful swimmer.”  So they asked; and Ox, who was easy going and kind as well as a good swimmer, complied.


The river was swift and rather deep, but Ox was strong.  Rat and Cat cheered as he took the lead.  Close the far side of the river, Rat crept up behind Cat and suddenly pushed him into the water where Cat began to flounder.  Then climbing onto Ox’s head Rat jumped to the shore before Ox could step upon the land, and proudly presented himself to the Jade Emperor.


“Ahhh...,” said the Jade Emperor. “The first year of the zodiac will be named after you, Rat.”

Ox was tricked into second place, but he was content with the second year of the zodiac being named after him.  The rest of the animals followed in this order: Tiger, also a strong swimmer; Rabbit, who hopped across the river on stones and then floated on a log; Dragon, who was not first because he helped the others by providing rain and pushing Rabbit with a little extra breeze; Snake who rode across on Horse’s hoofs; Horse, who is now fearful of snakes; Goat, Monkey and Rooster, who shared a raft and arrived together; Dog, who had taken the time to bathe in the river; and Boar, who ate and rested before coming.  Twelve animals in all.

As for Cat, pushed into the water by Rat, he finally crawled out of the water wet and bedraggled, but was too late to have a year named after him.  Cat has taken his frustration out on Rat and his cousins the mice ever since.
﻿﻿

So now you know why there is no Year of the Cat.  ﻿﻿﻿﻿
Some other interesting notes about Chinese New Year.  The Chinese New Year follows the lunar calendar, thus changing from year to year as to when it begins.  The celebration lasts fifteen days, ending with the Lantern Festival.  The whole fifteen days are known as the Spring Festival. 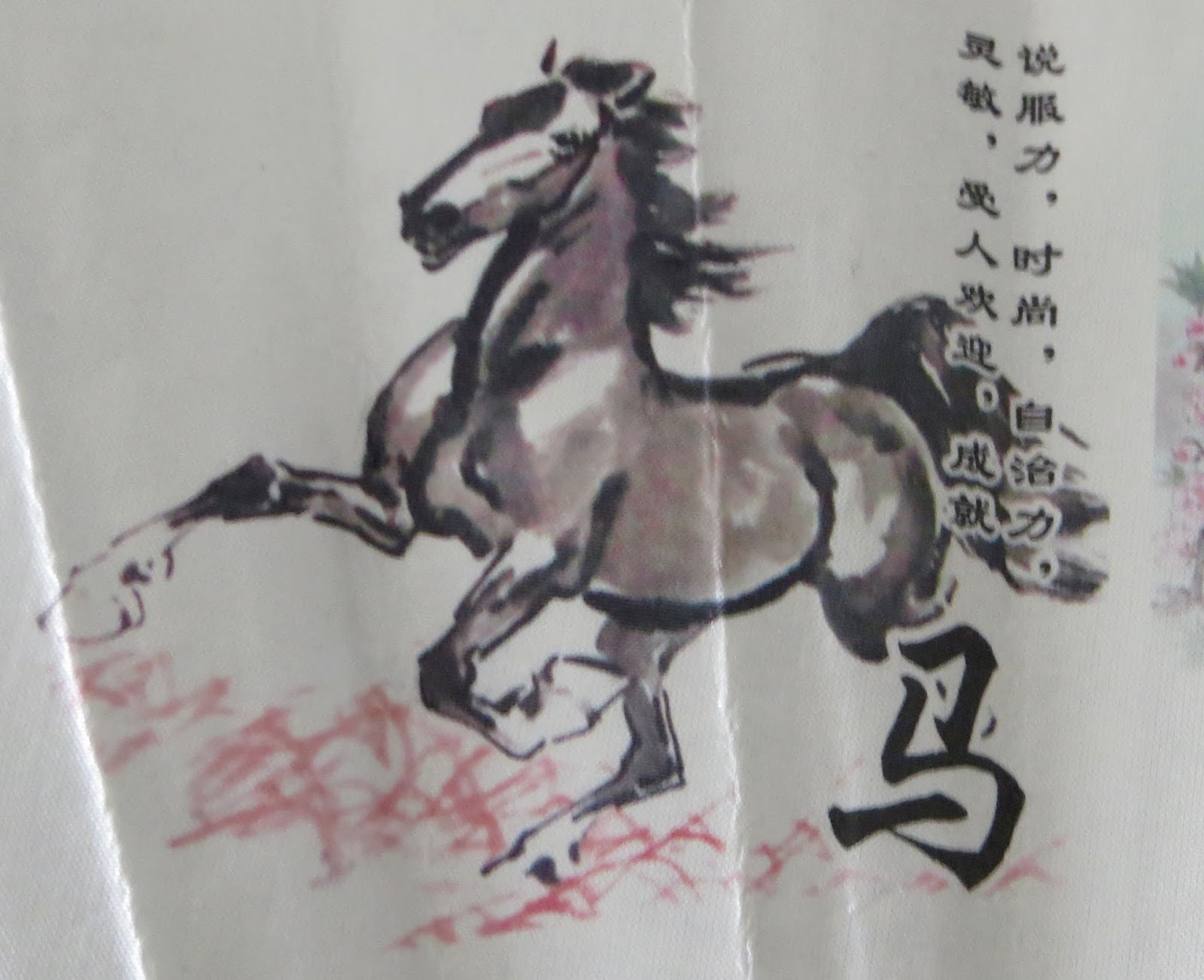 This year begins on January 31.  It is year number 4712, the Year of the Horse.  Each animal has special characteristics attributed to it.  If you want to know what your zodiac animal is click here .  There are also other interesting articles about the Chinese Zodiac on this website.  Here's another website with fun activities.

Karen Chace, a storytelling friend, has a wonderful blog.  Click here for her offering of stories about horses.

Another interesting blog about the Year of the Horse can be found here.  To quote from it, "...grab a fistful of mane, hang on to the reins, cast your old cares to the wind and let out a whoop of delight–Yeeehaaw!"
Posted by Stories by Julie at 9:20 AM

Thanks sooooo much for this. I loved returning to this tale of the bedraggled and forever after chasing cat! It made me think of another cat tale I love, The Cat Who Went to Heaven - this one Buddhist - told by Elizabeth Coatsworth. Thanks so much Julie!
I shared this wonderful blog on FB for my friends too.

Thank you Marni. I too liked The Cat Who Went to Heaven. I told this story to a group of fifth graders today. They had fun with it.