T is for Temptation

Janet ventured out one day knowing full well that she was not supposed to go anywhere near Carterhaugh.  She found herself there anyway perhaps because it is tempting to go where one has been forbidden to go.  It was tempting to pluck a sweet smelling rose; so she did.  The young man who appeared tempted her to walk with him. 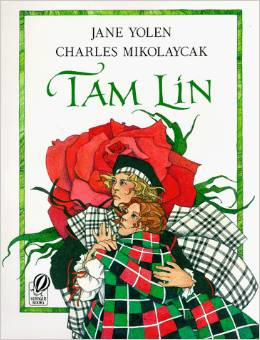 So many temptations all in one afternoon.  And if you know the story of Janet and Tam Lin (or the ballad), you know not only how tempted she was, but also that he was tempted as well.  Janet was different from the other lassies who made their way either through knowledge or fate to Carterhaugh.  She was a young woman who knew her mind.  She was more curious than afraid.  Janet went of her own free will into the forest with Tam Lin.

Janet proved to be brave when she freed Tam Lin from the faerie spell.  And because she yielded to temptation, she found something so precious she was willing to give her own life to save his.

Temptation finds us all at various points in our lives.  We must judge the merits of the temptation before giving in to it.  Will it give satisfaction for a moment or a life-time?  Is it fleeting like the taste of chocolate cake or life changing as in the case of True Love?  Only we can decide for ourselves, and thus our free will.

Now back to the story.  Janet saved Tam Lin’s life and did not lose her own although she risked it.  Their child had two loving parents because of Janet’s bravery.  Carterhaugh was returned to its rightful heirs, and all turned out for the best.  So one might say with all that temptation going ‘round, a life was saved and two lives were changed and a third life begun and the Fairy Queen lost because of True Love.

Not all temptations turn out so well, but in Fairy Tales, true love finds its own and proves to have a pull far harder to resist than chocolate cake at midnight.

Posted by Stories by Julie at 9:19 AM